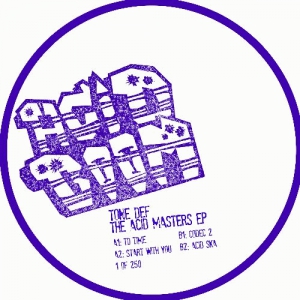 Tone Def are the original Bournemouth ravers with some absolute classics released in the early 90’s on Moving Shadow. Rog from the band is also the founder of Void Acoustics, the ultimate in club and festival audio equipment, a hobby that became a huge business empire for him.

This EP was written during 1990 to 1991 and had been lost for 30 years until recently, when Rog was checking some of his old ¼” tapes that he took out of storage. These are 4 original UK acid breakbeat rave tracks, encapsulating the raw DIY ethos of the era, of kids messing about in their bedrooms, writing music with no boundaries or templates. Never heard before, never released before… until now.

Acid Boom is a sister label to the Vinyl Fanatiks family. A vehicle to release that early 90’s acid sound that would later morph into rave. High energy 303’s, 808 and 909 drum machines, synced up to rolling breakbeats. Whether music from back in the day or new music that’s been created to emulate that early warehouse sound, Acid Boom is here to take you on a rush.

Organize, share and promote your favorite music by creating  your own playlists, start right now 38860add this record's tracks to a playlist