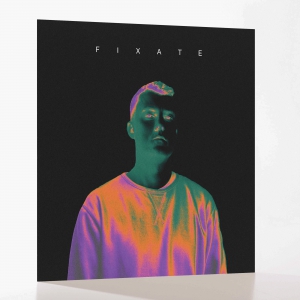 A lot has happened since Fixate released his last full length record, ‘What Goes Around’, on Exit Records in 2017. After putting out two Bandcamp EPs (‘Glare’ & ‘Confusion’) and several remixes—including his ‘Ripgroove Refix’, which famously went viral on Sherelle’s 2019 Boiler Room set and was eventually released as official remix on Ice Cream Records—he now presents his self-titled debut album ‘Fixate’.

Developed over five years, the project showcases Fixate’s sound palette in all its variety, a diversity of taste that’s reflected in his supporters: he’s garnered attention from icons like Andy C, Goldie, and Totally Enormous Extinct Dinosaurs, as well as underground tastemakers like Call Super, Toddla T, and Skee Mask. Ross From Friends closed off his 2020 Room Isolation set with Fixate’s breaky acid number ‘On Edge’; Sicaria Sound spun the dub-influenced album opener ‘Ruminate’ in their sets; and Madam X had sub-heavy track ‘Gristle’ doing the rounds.

The LP also sees several collaborations: Fixate worked with DnB legend DRS on ‘Down’, pairing his dark instrumental with equally dark subjects. On percussive hard-hitter ‘Backpedal’, he experiments with halftime grooves alongside fellow Exit artist Itoa. Dubstep producer Cimm makes an appearance on eski-influenced ‘Back to BC’. Finally, ‘Programmed To Fail’ sees the artist teaming up with label boss dBridge to create a soundtrack for AI world domination.

Organize, share and promote your favorite music by creating  your own playlists, start right now 38949add this record's tracks to a playlist