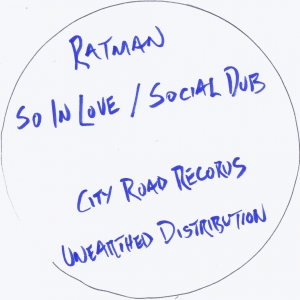 City Road is proud to present two unearthed garage productions from Ratman. They originate from around the turn of the millennium, when UKG was hitting its stride but hadn’t quite found a footing in Bristol.

Ratty and a friend were at St Paul’s Carnival somewhere around 1996 when they happened upon a small soundsystem playing out of the back of someone’s car. The minimal, swung 2-step rhythms sounded completely alien to them, and set them off on a quest into the burgeoning garage sound, resulting in Rat producing a bootleg of an evergreen pop classic of the era.

Rat was a well established part of Bristol’s underground music community with a smattering of jungle-oriented singles behind him and the odd remix commission. Around the same time he made the bootleg, he was approached about remixing a track on a major label. While it went down a storm amongst his peers, Ratty's’bass-heavy version wasn’t a match for the label’s vision and so the remix sat gathering dust for some 20 years.

Now both these misfit, quintessentially Bristolian twists on the UKG sound get a fresh airing on a label based just round the corner from where that car soundsystem was rinsing out mystery garage rollers all those years before.

Organize, share and promote your favorite music by creating  your own playlists, start right now 39090add this record's tracks to a playlist