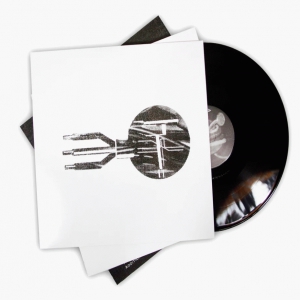 We've noticed heightened data corruption and screen-swipe intensity around the Bristol / Avon region and it's connected devices... But it is too late, the Warning Signals only unveiled themselves at the point of no return....

Fuck it, Bad Tracking are here to dance and sway in our technological demise, to eat all the fruit of our distracted labour and spit it out at our faces with verbal frequency and full-frontal soundystem-testing - enter the mosh, submit to the end time and take one last gulp of reality before it's gone.

Part 2 of the Avon Terror Corps double-trouble album drop, along with Kinlaw & Franco Franco's new one, here comes the long-awaited album by none other than BAD TRACKING!

Here goes...
"On the event horizon for a while, at last we’re able to share the first full length hard copy from Bad Tracking - known in the flesh as Gordon Apps and Max Kelan. Edge-to-edge, this duo inhabit a cold realm where every endpoint is compromised and every circuit board is fried. Their notorious and blistering live show immortalised in the thousand yard stare of its survivors - innocent bystanders who often struggle to erase the experience from their now corrupted memory dumps.

LP opener ‘Heart’ promptly sets the tone - greeting us with an auditory blue screen of death, jittering and shuddering forwards with no known resolution… But it’s not long before blasts of harsh rhythmic noise erupt from static, dissociated fog. By ‘Black Rew’, proceedings reach full velocity before crashing abruptly to a halt. Beneath the squall, you can almost hear the drone back at the data centre as the operator pulls frantically at the underlay, struggling to distinguish sinew from circuitry and meshwork.

Reboot the system onto Side B, and we’re even treated to a guest appearance from Harry ‘Iceman’ Furniss, who’s cornet eructs some of the only distinguishably organic matter on the record. Then, power on through more mechanical, pulsating chaos - until outro ‘Leisure Park’ hoses you off and sends you on your way."

Hardwire yourself into this one...

Organize, share and promote your favorite music by creating  your own playlists, start right now 39357add this record's tracks to a playlist