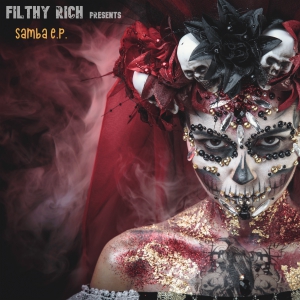 Edinburgh based DJ and producer Filthy Rich, head honcho at independent techno label ‘Zimp Recordings’, is a deliciously slippery artist with an engorged techno sack who’s always at the ready to spurt his computer generated juicy tit bits all over your proverbial techno flaps.

This release sees him pulling off as much energetic samba and animated conga as it’s possible for one to technically muster. The vinyl is literally rammed chock full of staccato vocals, modulating metallic chords, big percussion, whistles and shouting, all over thumping tribal African beats. Along-with the first two original trax there’s a full on analogue synth growling breakz remix by Kris Breaks of a third, a beautifully produced pounding clinical banger of a techno remix from Duellist & Kenny Campbell, a precisely linear, chanting and hypnotic mix from Polly Ambergris and a stunning debut track from Tom K McCarthy, commonly known by his DJ alias of Toxocologist, that’s a veritable bass driven atmospheric stomper overlaid with trippy melodies and vocals. Utterly outrageous dance floor fodder of the highest order if ever there was some.

Organize, share and promote your favorite music by creating  your own playlists, start right now 39414add this record's tracks to a playlist