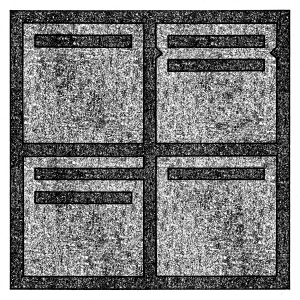 0860 is a project by Charlie Fieber aka Fracture inspired by London Pirate Radio. The project includes an album, radio station and interview series that explores the history and legacy of Pirate Radio and its importance in the development of UK underground music.

0860 is presented via an 8-track, DJ-friendly 2 x 12" Vinyl Album, 19-track mixtape cassette and the radio station 0860.fm, which is broadcasting now. There is also a Pirate Radio Art Print from UTILE and T-Shirts. Broadcasting now on 0860.fm is an additional 90-min 'Signal Test' ambient album by Fracture.

Track two is ‘Where Are U’ and encourages us to ask ourselves that question through the exploration of full speed Breakbeat Electro. If we know where we are, we can begin to look into where we are going. Probably the dance floor.

Track three is ‘it's NP-Complicated’ which sets out an uncomplicated blend of bubbling bass and simple sympathetic drums, providing us with a network to feel more empowered and to build a sense of community.

Organize, share and promote your favorite music by creating  your own playlists, start right now 39599add this record's tracks to a playlist