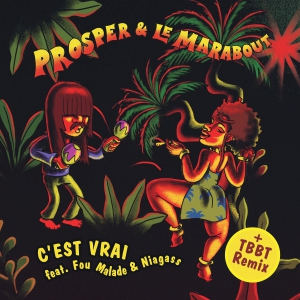 Born from a virtual encounter in lockdown between two Parisian neighbors, the DJ/producer Prosper and saxophonist Le Marabout, this new playful and joyous project is pulling freely from the Afro, Funk, Disco, Hip-Hop, Oriental and Electro influences of the two artists.
The iconoclastic DJ Romain “Prosper” Coolen, fervent purveyor of no holds barred euphoria on the dance floor, and the versatile saxophonist, composer and jack-of-all-trades Johann “Le Marabout” Guihard offer us a lavish, eclectic, uninhibited, coherent and furiously groovy listening experience.

Over the bouncing beat and snarling horns, these two juggle lyrics back and forth in Wolof (Senegal’s most widely spoken language), calling out those fake friends who smile in your face before stabbing you in the back.

Organize, share and promote your favorite music by creating  your own playlists, start right now 39057add this record's tracks to a playlist