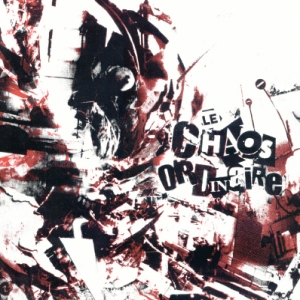 Special package Réalisation silkscreen Atelier-Arcane. A Double CD 24 new tracks Photo's booklet. The encounter of the energies of Groin, Yom and La Foudre accompanied by "the amours" evolvent around the same topic : the passive violence of a terrible everyday routine: "Le Chaos Ordinaire" ("The ordinary chaos") This project has been entirely realized by craftsmen, artists, with traditional, even old-fashioned technologies. Every album casket or every album sleeve has its own story, actually every pressing has been done individually so every single object is unique in terms of its shade, its size or mechanical path (erosions, scratches, manipulations, insertion of diverses ADN {??), involuntary things, digital stamps being included or not, etc.) Thus, the return to a chaos has infinite variations, is possible again by disrupting the law of industrial formatting. Us craftsmen, we hope having given a bit of our soul and skin to this project by slipping our love, our anger, our hope and even sometimes our blood into it ;-) ("an accident happens so quickly in a studio") An error in the industry multiplies itself in a production line, clones and reproduces itself and sometimes results in the destruction of the whole of a production. Here, in the contrary, every error is unique, living, charged and has a bit of us craftsmen and artists in it. This project would have sometimes being described as utopian or not profitable... In this case, one probably would need to redefine "profitability", this terrible word we are sometimes labeled with (je ne sais pas trop ce que tu vx dire ac affubler...): "Sorry, madam, you are no longer profitable." "How much are you worth, you, are you profitable or not..how much are you worth?" The adventure really started in the beginning of 2008 and the compositions finished in November [of the same year]. After that started the realisation of this project, which will be finished this March.