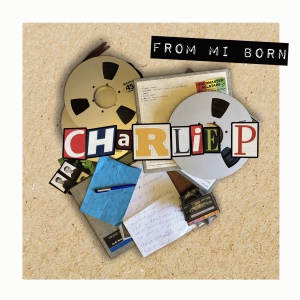 ENGLISH:
Dubquake records invites you to dive into the very beginnings of Charlie P’s career.

During a trip to Charlie P’s hometown Southend-On-Sea, Rico, the artistic director of Dubquake records, as well as the producer and selecta for O.B.F. Soundsystem, found himself in the studio of the singer’s first group, The Goldmaster Alllstars. During a discussion, Malcolm, a founder of the group, pulled out some old tapes, the first recordings of Charlie. Rico couldn’t believe his ears! He recognised the voice of his friend, except on these recordings, it was the voice of a child. What he was hearing were
the first tracks ever written by Charlie with the Goldmaster Allstars, between the age of 8 and 13. “ We need to put these tracks out!” exclaimed Rico. This was the start of what would become “From Mi Born”.

It was from his mother that Charlie caught the singing bug. From a young age, she started training his voice, making him sing along to Motown classics. His natural talent was evident from the very start.
For Charlie, reggae is, above all else, a family affair. His parents were fans of reggae culture, and his uncle ran the Simba Sound System. So it was only natural that Charlie’s father would eventually introduce him to his friend Malcolm, of Goldmaster Allstars. He joined the group, even though he was only 8 years old. Thanks to the Allstars, and through the training given to him by the group’s singer, GT Moore, he was introduced to different forms of reggae singing. Whether it was toast, fast style, deejay, chant, he learnt every style and quickly demonstrated a predisposed talent. Everything moved rapidly and he quickly found himself recording songs, stringing together concerts, jams and acoustic performances in the street and on the margins of folk festivals.

Following the death of his mother, Charlie went through a difficult period, where petty thievery led to stints in prison. Yet thanks to his entourage, the unwavering support of his family and the creative outlet lent to him by reggae, he managed to extricate himself from this downward spiral and instead focus on music. This was the beginning of his career.

These tracks, which exude an incredible amount of emotion, are written in the purest vein of reggae, ska and dub. With “We Can’t Give Up”, Charlie leans on the brass section of Goldmaster Allstars, summoning the power that helped him keep going despite the loss of his mother. On “ 4 Policemen”, he describes his run-ins with the law as a suburban youth. The ska bomb “ Movin On Up”, full of energy and touching naïveté, is a track written by his mother. “ Oh Jah”, a feat of reggae strength, is an ode to this culture, and to the energy it gave Charlie to help him overcome his own demons. Also included are the dub versions, with a killer groove, standing as proof of the quality of production and of the musical chops of the Goldmaster Allstars.

“From Mi Born” is an intimate and historical part of the career of the “youngest of the veterans” of the reggae and dub scene.

This album release is accompanied by a documentary covering the childhood of Charlie P.

Organize, share and promote your favorite music by creating  your own playlists, start right now 34096add this record's tracks to a playlist