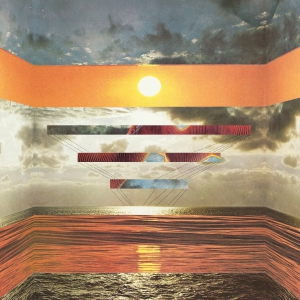 Somewhere in the middle of the first track, “Torres e Baldios”, there’s a sudden change of pace with percussion rhythms interfering with the trance-like sound of the first six minutes. It sounds like steps, people running away on a corridor bashing their feet. It dazzles you because of how unexpected it is, how unpredictable those sounds sound like and, most of all, how it makes perfect sense. It is a monstrous piece. And the beginning of a new age for Ondness, in the same year he defied his Serpente moniker to create an absolute classic, “Dias da Aranha”.

What makes “Oeste A.D.” so remarkable is the intangible idea of nostalgia. “Aqua Matrix Alternative Nation” recreates with a slowed down mentality the theme of one of the main events of the Expo 98 in Lisbon. It’s nowhere similar to the original, what it does is to mess around with the global ideas that were such a big part of that event. The Portuguese musicians that were invited to collaborate with Expo 98 were mesmerized by the ideas of union and globalization, creating overpriced music that sounds like shit today. “Aqua Matrix Alternative Nation” messes around with that vibe in a positive way. Think Mark Leckey playing around with his rave memories. Same thing, but in Portugal we had Expo 98.

Jokes aside, B Side is more futuristic with “Torres e Baldios II” and “Endless Domingo”, a nod to “Endless Summer”, by Fennesz, and “Endless Happiness” (from “Beaches And Canyons”), by Black Dice, mashing up – freely - both covers and reminding of how great 2001/2002 was for experimental music. Both tracks are full of sci-fi drama and this sickness of the future that has been travelling with Ondness since its early days. But the approach here is somehow different. Before “Oeste A.D.” the Ondness sound was fragmented, sparse and intensively reflexive. There was this uncertainty to it that made the previously releases so good. But “Oeste A.D.” is full of clarity, the phrases are straightforward, and the music moves in one direction, continuously. Before, there were loads of unanswered questions. The only doubt is when will the world start to care and listen to Bruno’s brilliant music. Now sounds like a good time.

Organize, share and promote your favorite music by creating  your own playlists, start right now 39151add this record's tracks to a playlist