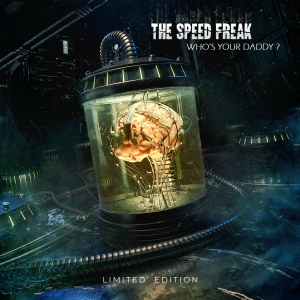 Killer of a kind for all party time Hardcore lovers... A wicked melt of Frenchcore, Speed Gabber and hard drop surprises :)

Since 1992, internationally renowned pioneer The Speed Freak has been actively involved in
building the Hardcore scene around the globe. In 2022, the artist celebrates 30 years of serving the
music that makes his heart beat: Hardcore! To celebrate this anniversary, The Speed Freak offers
the best gift to his fans: an album of 12 tracks entitled "Who's Your Daddy? A nice way to highlight
musically the incredible adventure of these last three decades on the Hard Music front!
THE SPEED FREAK : 3 DECADES OF AN OUTSTANDING CAREER
A true living myth of the Hardcore scene, Martin Damm aka The Speed Freak has seen his countless
productions in the record boxes of all the DJs of the genre. With an impressive discography of nearly
280 references, 2 records certified gold, the creation of no less than 5 labels, and a dozen artistic
projects, The Speed Freak has framed the outlines of an ever flourishing scene by proposing his
original vision of Hard Music.
When he embarked on the adventure of The Speed Freak in 1992, he could not imagine the turn that
this project would take: “I had no idea that The Speed Freak would soon become my main project,
and for decades allow me to play gigs all over the world. With releases on labels like Monotone,
Shockwave, Psychik Genocide, Absurd Audio, Gabberdisco, and many more, the last 30 years have
been a wild ride.”
WHO'S YOUR DADDY ? : A DELICIOUSLY EFFECTIVE CONCEPT
It is this unusual musical path that brings the artist to present today his 13th album, "Who's Your
Daddy?”. Being always faithful to his sharp vision of Hard Music, The Speed Freak proves once again
his talent to deconstruct the genre to instill multiple influences in it.
This opus is presented as the pure expression of his evolving, energetic style, at the antipodes of the
dark hardcore he explored at the beginning of his career. The artist says: “my goal has always been

to […] provide an alternative kind of hard music, using contemporary hard styles as a basis, and
adding my own personal musical and technical flavour onto it. […] The same could be said about
this album, which presents a different approach to Frenchcore, Hardcore, and Hardtek, adding lots
of personal touches, details, and edits with a certain psychedelic feeling and trippyness that makes
the tracks not only work on dancefloors, but also makes them interesting for home listeners.”
WHO'S YOUR DADDY ? : POWERFUL GEMS AND UNPRECEDENTED COLLABORATIONS
Providing liberating energies through a subtle and gracefully mastered mix of genres, Who's Your
Daddy ? is full of hypnotic and tasty gems.
The album begins with The High One, furiously announcing the great epic that awaits the listener: a
race against the beat with sharp kicks. The tracks Fireball (Harder) and Bodybeat follow this frantic
pace, embodying the artist's penchant for heady samples, his very own signature. Legalize (Album
Version), a colorful track in collaboration with the young talent Klaus Wiegmann, is one of the most
hypnotic tracks on the album. It sets up as a joyful break, before the artist follows up with a
cataclysm of violence with Gun Goes Bang, Mönschrapel and True Form, a track composed with the
rising star of the Hard Music landscape, Chrysiz. Inside Out (Intensified) embodies the artist's
willingness to go off the beaten track by starting on Hard Trance rhythms to end on a flurry of
radioactive kicks. He embraces directly on a banger of the most intense, Abschiss (Album Remodel)
to make room for Bruticus, produced in a flood of brutality, with the famous maestro of the German
scene Stormtrooper. Who's Your Daddy ? ends with Art Of Vengeance, a track with masterful kicks
variations and Operation Discoball, a detonating track that builds on funk and disco rhythms to end
beautifully on an exquisite industrial techno.
With Who's Your Daddy?, The Speed Freak demonstrates once again his ability to juggle styles,
infusing his music with influences as rich and varied as disco, techno or dub, all with unequalled
skills. As a real wink to his heritage and guarantor of the musical evolution of the scene, the master
of the crossover imposes again his musical genius on the front of the scene. For his 30 years of
career, he offers a very special opus, full of surprises that will indeed take effect on the dancefloor.

Organize, share and promote your favorite music by creating  your own playlists, start right now 39791add this record's tracks to a playlist