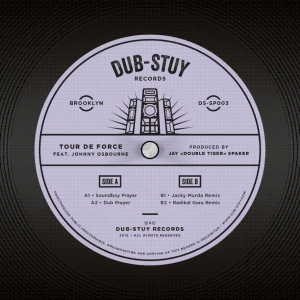 Brooklyn’s Tour de Force (TDF) begin 2016 with an update to one of their best, and most loved, dubplate weapons. Soundboy Prayer was written in late 2013 and has spent the past few years as a centerpiece of TDF sets, wreckin’ havoc on the Dub-Stuysystem with its iconic Johnny Osbourne vocal sample, trampling horns, and dark melodies. Consistent support from DJs and crowd reaction convinced TDF to dust off the riddim and give it a full release. The official 12” refreshes the production with added bass weight, a new arrangement, and a cavernous dub version.

Backing the original and its dub are two remixes from producers within the worldwide sound system community whose approach echoes TDF’s blend of reggae and bass music. Chopstick Dubplate’s Jacky Murda, who has worked with Barrington Levy, Top Cat, and Johnny Osbourne himself, was a natural fit to capture the junglist vibe of the original and turn it into an energetic jungle remix that begs for the rewind. Poland’sRadikal Guru, one of the brightest lights of the European dub community, provides the second remix, keeping things dubby and nice with a blend of reggae and dubstep that emphasises catchy string melodies and a weighty bass line. “Radikal Guru’s approach to blending traditions has been an inspiration for us,” says TDF Q-Mastah, “so he was a natural choice for this release.”

Organize, share and promote your favorite music by creating  your own playlists, start right now 25320add this record's tracks to a playlist