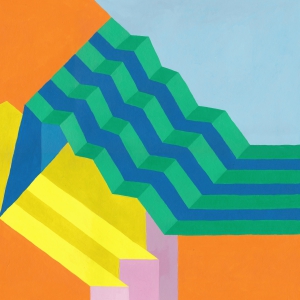 Livity Sound has evolved considerably since 2011. Originally it was established as a vessel for new tracks from Peverelist, Kowton and Asusu – three Bristol-based artists who found common ground between their distinct styles in pursuit of a reduced, heavyweight strain of soundsystem techno. A run of hand-stamped 12”s and a three-way live show followed, while the Reverse sister label provided a conduit for emergent artists to enter the fray. Early breakthroughs from Hodge, Batu, Bruce and Simo Cell pointed to the broader horizons Livity was heading towards – an expanding community of like-minded artists creating dancefloor misfits that somehow fit together.

First appearing with a compilation of remixes in 2014, Tess Redburn’s iconic artwork heralded a fresh new impetus for the label, and the music seemed to become more colourful in kind. While the founding principles of space, bass and fractured rhythms have largely abounded up to the present day, there’s been a progressively broader palette of sound employed. Technoid melodic shimmers, earthen percussion and found sounds have become as prominent as sub frequencies and cavernous dub echoes, delivered by a vivid and varied ensemble of producers.

Molten Mirrors captures the dynamic energy of Livity Sound at 10, with 19 artists from the label’s roster coming together to present an honest document of where the label is at in the present moment. No over-arching concepts, no hackneyed themes – true to Livity’s open-ended mode since 2011, it’s as much a declaration of community as a cross-section of experimental dance music in 2021. Trying to pin down the sonic styles is something of a fools errand – from the older guard to recent signings, what binds together this international, inter-generational span of artists is their lack of convention.

A case in point: Azu Tiwaline’s submerged and subdued rhythmic incantations sit between Bakongo (aka Roska)’s raw and angular drum pressure and Al Wootton’s needlepoint, swinging dub tech variations. Nothing is totally placeable, and yet everything meets that ill-defined Livity Sound ethos, which stretches back to the earliest 12”s.

Club music continues to mutate and break new ground with each passing year, and as a faithful document of one microcosm within an ever-expanding music culture, Molten Mirrors reflects the multifaceted, technicolour energy of the here and now while celebrating the possibilities of an open, unpredictable future.

Organize, share and promote your favorite music by creating  your own playlists, start right now 37961add this record's tracks to a playlist