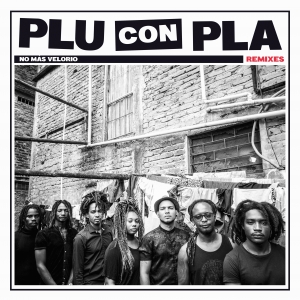 From Tumaco, in the deep pacific coast of Colombia, Plu Con Pla carries forward essential styles such as Bunde and Currulao, which were created by the African diaspora in response to the realities of life in this coastal jungle territory. The musical language of the South Pacific region is traditionally interpreted with a marimba handmade from the wood of the Chontaduro palm tree and resonating tubes of Guadua (similar to bamboo), a large, two-sided bass drum called the bombo, two slender, high-pitched drums called cununos, and cylindrical shaker called a guasá, along with powerful call and response vocals. Plu con Pla brings a mastery of this language and repertoire together with an urgency of exploration and growth, incorporating hard-hitting urban styles such as Hip Hop and Reggae into their expression, and bringing Bass, Drum Set, Keys, and more into the mix. True to their roots, collective process and social justice consciousness is central to both their music and their actions, with lyrics that address hard themes such as racism and civil war, and a continuing commitment to teaching, leading workshops and accompanying the peace process in Colombia.