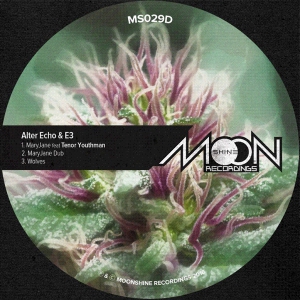 The Moonshine Recordings crew happily kicks off 2017 confidently by continuing its search for the finest dub-oriented bass music created by musicians from around the globe. This time the Polish flagship proudly welcomes Portland’s Alter Echo and E3 – a duo that has been on everyone’s watch list within dub/post-dubstep/soundsystem culture for over a decade. Their contribution to Moonshine catalogued as ‘MS029’, contains three chants that are vocally blessed by the Russian rootsman/dub purist Tenor Youthman. Together they unravel their dedication to dub music and the Marijuana plant that calls for international peace and unity.

The producers Alter Echo and E3, more commonly abbreviated as ‘AEE3’, are notorious for their sonic booms and thick layers of smokey atmospheres that align at various tempos. Their iconical dubbing and analogue mixing aesthetics have allowed their music to resonate as artists in soundsystem culture. Together they strive to deliver dub of mesmerizing excellence and to champion sound. Tenor Youtman joins their magnificent styling, a Russian soundsystem pioneer who brings the message of love and consciousness across lands. His love for spreading knowledge and heavy bass goes beyond borders, with the help of his microphone.

‘Mary Jane’ contains nothing but special sonics that will intoxicate listeners with a unifying sense of vibrations. Tenor Youthman’s immediately grabs the microphone to uplift and inspire, while this dubstep-oriented production by AEE3 calls for a tenacious experience through sound. The more conscious-expanding Dub version of the title track uncovers the majestic sound the two dub magicians from Portland process and transmission vibrantly. Bass pressure that jumps off the walls of the hazy basements is felt from afar; an impact of anthemic oscillations that will stick to fans of dub music will stick for a while. The darker angle of ‘Wolves’ mesmerizes and overwhelms, fueling you with dread and darkness from the PDX area - and it’s these sought-after dub plates that were bound to see the light of day on the trusted Moonshine Recordings.

Organize, share and promote your favorite music by creating  your own playlists, start right now 27483add this record's tracks to a playlist