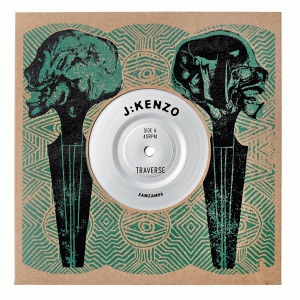 Consistently at the leading-edge of underground bass music worldwide, it’s always an honor to bring you new music from J:Kenzo. On ZamZam 88 he steps up for his third Zam, and true to form it’s a masterclass on both sides.

From the first second of the tune, “Traverse” teleports us straight into equatorial zones; humid spaces of dense green and animal calls from the canopy above. Deep pads and tribal percussion take a path to a driving 4/4 kick, in turn dropping into a massive, rolling bassline that recalls the best of late 2000s and early 2010s 135-140 while keeping the dub flourishes utterly fresh for the now.

No stranger to garage, especially in his Jodo Kast identity, Kenzo satisfies our love for the form with “Deuce,” bringing the drums and vintage flavor again, but this time in the service of mightily-swung UKG in fine style, expertly dark & dubwise 2 Step that hits just right. Chopped, panned & verbed to perfection, this is hard yet subtle dance music from the roots that nods to the past & winks to the future of funk with the light touch of a don in his prime.

Organize, share and promote your favorite music by creating  your own playlists, start right now 39566add this record's tracks to a playlist