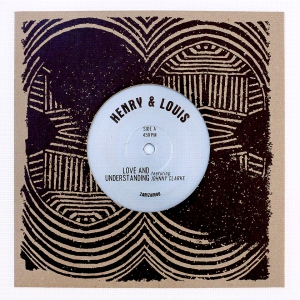 ZamZam 40 is a milestone… as such we wanted to commemorate this chapter by coming full circle to where we began as a label - with another stunning Henry & Louis release from the vaults - this time featuring none other than reggae royalty Johnny Clarke.

Henry & Louis (AKA Jack Lundie and Andy Scholes) is a Bristol institution and UK sound system mainstay, birthed in 1988. The duo’s 2Kings label, founded in 1990, is also a cornerstone of the 'Bristol sound', with releases including “How Can A Man Be Happy” mixed at the legendary Smith & Mighty studio in St Paul’s, “Jah Jah NeverFail I” (first released on ZamZam’s progenitor BSI Records), and many others, forming part of the city’s musical iconography. Pinch, RSD, Prince Jammo, Sledgehead and other close friends round out the label’s stable, and Andy Scholes DJs globally representing the 2Kings family.

A heavily edited version of “Love and Understanding” was released on the seminal Time Will Tell LP (first on BSI, then 2Kings). This new ZamZam 7” is the first time the full vocal and full dub version have been heard in all their glory. The original lyric was penned by Andy Scholes and released on a 2Kings 12” - Johnny Clarke took hold of the words and laid down a magesterial version when Andy and Jack travelled to Jamaica in 1996. Recorded in a single take at 'Chunky’s Studio,’ Sherlock Crescent, Kingston 20 - what a moment that must have been.

The skeletal riddim and deeply melodic bassline form the perfect bedrock for his sublime performance. digi-percussion, clipped horns and subtle guitar plucks complete a truly revelatory tune. The dub version is a hallucinogenic ride that simply has to be heard to be believed. Stripped raw to the core of 4/4 kick, heavily reverbed snare and knocking percussion, the flavor borders on industrial - distorted and atmospheric, thick with tape hiss and impossibly long echoes - utterly unique and uncompromising. It is shocking that this vocal and dub have not been heard before now, and we are proud to be the label to present them to the world.

Organize, share and promote your favorite music by creating  your own playlists, start right now 25769add this record's tracks to a playlist