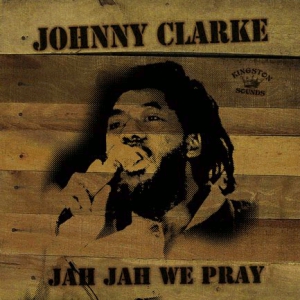 Johnny Clarke ruled the Dancehall in the mid 1970’s, using the cleaver 'Flyers Rhythms'
that gave some of his tunes an edge with the Sound Systems. But his voice was always bigger than this and his versatility to sing a wide range of vocal styles, has seen him cut through the decades as one of Reggae’s best voices.

Johnny Clarke (b.1955.Jamaica) cut his musical teeth at the age of seventeen, recording his first song ‘God made the sea and sun’ for Producer Clancy Eccles. A low key release but one that led to Johnny catching Producer Rupie Edwards eye, when he appeared at a talent contest at Bull Bay. Impressed by his voice both live and on disc, Rupie cut a few tunes with Johnny, ’Don’t Go Julie’ and ‘Everyday Wondering’ the later of which had
success not only in Jamaica, but also in the UK reggae market. The back bones of ‘Everyday Wandering’ now voiced by Rupie himself would lead onto an even bigger hit in the 70’s with the classic ‘Irie Feelings’.

Johnny Clarke’s decision to move on around this time coincided with producer Bunny ‘Striker’ Lee looking for a new singer to compete in the ever moving Dancehall arena. Johnnie’s break came in a strange way, having provided backing vocals initially to a Bunny Lee produced cut, Earl Zero’s ‘None Shall Escape the Judgment’.
The very same session the drummer on the track, Carlton ‘Santa’ Davis, when asked by Bunny to come up with some new sound and while working the High - Hat cymbals,
hitting it when open, then when shut (based on the Philadelphia Disco Sound known as the Phili - Sound ) gave what the reggae world would call a ‘Flyers Sound’.
On transferring the tune to four track to mix down at King Tubby’s studio, Earl Zero’s vocal was mistakenly left off. Johnny Clarke being present at King Tubby’s and knowing the track already inside out, then sang the lead vocal. The track became a smash Sound System favourite and the rest as they say is history.

Johnny Clarke became one of Bunny’s main vocalists during the heyday that was the 1970’s. It’s from this vast cannon that we have selected some of the singers finest cuts.
His soulful voice worked the musical field from Dread to Rockers to Lovers Rock.
A great gift that on playing this album we hope you’ll agree carries through with the tests of time.

Organize, share and promote your favorite music by creating  your own playlists, start right now 21909add this record's tracks to a playlist