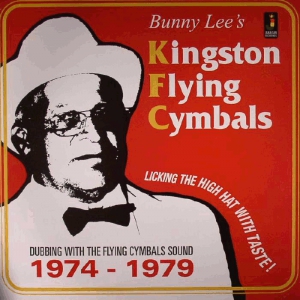 Bunny Lee’s flying cymbals, or flyers rhythms, dominated the dancehalls and the charts during 1974 and 1975. The style, based around the Philadelphia disco, or ‘Philly Bump’, sound of an open and closed hi-hat was not necessarily novel but Striker’s innovations of
bringing a number of different elements into play most certainly was. Johnny Clarke’s interpretation of Earl Zero’s ‘None Shall Escape The Judgement’, not only opens this set but also opened the floodgates for the flyers style. The story had begun the previous year with Lowell ‘Sly’ Dunbar…

“Sly played the flying cymbals first… I said to Sly ‘You played it on the Delroy Wilson tune for Channel One named ‘It’s A Shame’ and Sly played it before that with Skin, Flesh & Bones on ‘Here I Am Baby Come And Take Me’, the Al Green tune, when Al Brown sung it for Dickie Wong with the ‘tsk, tsk, tsk’ sound on the hi-hat. I named it flyers but they didn’t know
what flyers was!” Bunny ‘Striker’ Lee “The first session I played for Channel One was Delroy Wilson’s version to The Spinners’ ‘It’s A Shame’. It was a big hit for Jo Jo”. Sly Dunbar

“Santa was a great drummer. He started with The Soul Syndicate.
He wore size fourteen shoes and that’s why when he licked the drum it sound!
Sly played the drums so brilliant but he played different from Santa… I said “Santa I want something that sounds like it’s come from outer space!

This tune now, ’None Shall Escape The Judgement’, I was going home one night and I heard Chinna and Earl Zero playing this tune and Earl Zero was singing ‘None shall
escape the judgement in this time…’ I come and I listened and I said ‘I like the tune, you know, Chinna’ and Earl Zero said ‘Mr Lee. Come tomorrow down to Duke Reid’s studio.
I think I’m going to record it.’ They had ‘Dum, dum, dum… dum dum dum…dum dum dum dum dum dum dum’ and the beat of it…

So I asked Johnny Clarke to sing it with Earl Zero … they rehearsed it the whole day… but Earl Zero could only sing the front part so that night I asked Siddy (Bucknor) to run off a cut of the rhythm... ‘I a go try something’. That night me and Johnny Clarke… we were always
around together… we were up at Tubbys and Tubbys said ‘This guy can’t manage the song’ and I said ‘Johnny. Do you think you could a do it?’ and Johnny went into Tubby’s studio.
One cut! One cut! No error or nothing… ‘cause he’d been rehearsing it with Earl Zero the whole day.

It’s not the right name really. Anytime I did a session I used to get loads of Kentucky Fried Chicken
for the musicians and when it came they’d say ‘put up the flyers for Striker’ meaning the wings, which I loved, and they used to say 'Striker. When you a go fly?’ And everybody started to get puzzled when Johnny Clarke hit with this flyers. I used to love eat the chicken wings and I’d said ‘Santa… that drum sound on ‘Here I Am Baby’... I like it’ so when the rhythm done I said ‘It’s named flyers’ through the chicken wings. Sly had played it but he never realised what he had and because I loved my chicken wings we just named it flyers (sings) ‘tsk, tsk, tsk, tsk…’

So that night when we went up to Tubbys with the rhythm I said ‘Tubbs. You’ll like this rhythm... it’s different. When we do it I want something like it’s from outer space on the intro’. Tubbys passed it through the high pass filter on his machine where he pushed up one of the things on his board and
it thinned it out. Styled it out man! (sings) ‘tsk, tsk, tsk...’ Bunny ‘Striker’ Lee

And, before too long, “every tune we put out we put the rhythm behind it” and every Kingston producer followed suit with their own variation of Striker’s flying cymbals rhythms…

Organize, share and promote your favorite music by creating  your own playlists, start right now 23225add this record's tracks to a playlist