Jamaican Recordings LP 05 by The Aggrovators 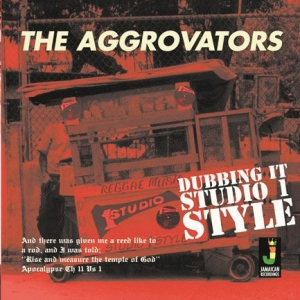 The Aggrovators were one of Jamaica's finest session bands. Many of the tracks you
know and love from the 1970's Reggae scene probably featured this group of musicians
in some shape or form. The band were put together by Bunny 'Striker' Lee one of Jamaica's
formidable producers,who with no studio of his own had to rely on buying studio time from
the existing establishments, such as Randy's Studio 17 and the Hookim brothers Channel 1.

Vocal duties would usually feature two of Bunny Lee's favourite singers Johnny Clarke and Cornell
Campbell who would also fill in if the need arise on Piano and rhythm guitar respectively.

The forward looking Mr Lee was inspired by the English music scenes interest in reggae especially
the skinhead cultures adoption of all things ska-ish. So much so that he called his reggae shop
/ label 'Agro Sounds' after the skinhead term for fighting / trouble..'Agro' . Later when looking for
a suitable name for his group what else could it be....THE AGGROVATORS were born.

Mr Coxsone Dodd's STUDIO ONE opened its doors in 1963 at 13 Brenford Road Kingston,
Jamaica, it would become the name for all his future productions.Coxsone Dodd started out
with one of the first Sound Systems in Jamaica, called Sir Coxsone The Downbeat , importing
American R & B records to fill his dances. A lack of supply of new / original material which is
very important to sound system supremacy would lead him during the 1950's to produce
Jamaican hits of his own.The Studio One set up would allow the opportunity to experiment
and fine tune these recordings. It became a hit factory releasing songs like Alton Ellis's
'I'm just a guy', ' live and learn', Delroy Wilson's 'Dancing mood', 'Riding for a fall', 'Rain from
the skies' and Larry Marshall's 'Mean Girl' to name but a few.Versions of which feature on this
collection.

The updating of Studio One classics which in some cases were reworkings of American R & B
tunes [ 'foreign tunes ' as they were known in Jamaica ], was common practice. The rhythms
were much loved favourites and with the added incentive that the musicians knew the tracks
inside out .This set of dubs are straight from the master tapes of such sessions orchestrated
by the man Bunny Lee himself, no one knew better ...you can't keep a good tune down never
mind a great one. So sit back and enjoy The Aggrovators in fine Studio One style........

Organize, share and promote your favorite music by creating  your own playlists, start right now 24203add this record's tracks to a playlist