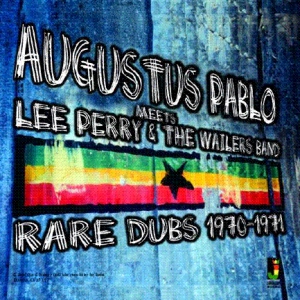 The mighty Lee Perry was the producer many have said,that enticed the best work,
both socially, politically and lest we forget musically from Bob Marley and the
Wailers Band. This was in no short terms aided by the excellent musicians that would
mutate from Lee Perry's own studio band The Upsetters into what would become
The Wailers band itself.

This set of musicians originally grew out of a group called The Hippy Boys. The core
of which consisted of Glenroy Adams on keyboards, Alva 'Reggie' Lewis on guitar and
brothers Carlton and Aston 'Familyman' Barrett on drums and bass respectively.
This quartet played on most of the Lee Perry produced Wailers material recorded
between 1970 and 1971. When in 1972 Bob Marley needed to put together a touring
band to promote his work in Europe the Barrett brothers left and became an integral
part of the Wailers band.

So this link between The Upsetters and the Wailers band would under the guidance
of Lee Perry produce an outstanding body of music.Recorded at Randy's Studio 17,
as at the time Lee Perry didn't have a studio of his own,but on checking out the various
studio's available, opted for Studio 17, liking the vibes it transmitted.

We have unearthed from this selection of work some rare dubs featuring the fabulous
melodica playing of Mr Augustus Pablo, playing over these classic rhythms and adding
a haunting additional feel to these already iconic tunes. On their initial release Lee Perry
recognising the strength of the rhythm tracks, planned to release the vocal cuts as one
album and the instrumental versions as another release.We at Jamaican Recordings
believing in all things rhythm, also think that these cuts in their dubbed form, with the
additional flavour of some fine melodica playing, deserved to be listened to in their own right.

They all tell a story worth listening to......

Organize, share and promote your favorite music by creating  your own playlists, start right now 19466add this record's tracks to a playlist