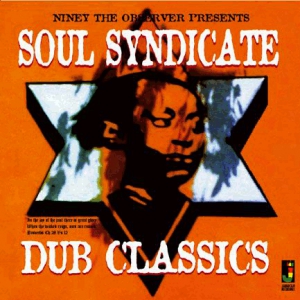 Reggae music in many ways reminds us of America’s Motown records.The music comes
out of its stable fast and furious we tend to know the songs, the artists, the studio but who ?
are the players.The unsung hero’s that in many cases, cut most of our favourite tracks
One such band this applies to in the Reggae field is the Soul Syndicate Band.

Each Jamaican record producer would have their favourite set of musicians they would
use, availability permitting. Although several musicians crossed over into different named
bands. For example a set of players working with Producer Bunny 'Striker' Lee would go
under the guise of The Aggrovators .The same group working with Producer Joe Gibbs
would work under the name The Professionals. Soul Syndicate were the band of choice
for Producer Niney the Observer, who used them for his own recordings and when you
put that aside the other artists Niney produced,Dennis Brown, Max Romeo, Michael Rose,
I Roy,The Ethiopians, Barry Brown, Gregory Issacs and Freddie McGregor. To name a few
and not necessary all, you begin to see the amount of material this set of musicians played on.

Built around the rhythm section of Calton 'Santa' Davis and George 'Fully' Fullwood, drums
and bass respectfully. They were usually accompanied by Earl 'Chinna' Smith,Tony Chin
on guitars, Keith Sterling, Gladstone 'Gladdy' Anderstone, Bernard 'Touter' Harvey, organ
/ keyboards and Noel 'Skully' Simms, percussion. Niney's tracks tended to be rhythm heavy
and thus Sound System favourites.But when brass was needed / called for ,this was provided
by the likes of Tommy McCook, Bobby Ellis, Felix ' Deadley Headley' Bennett. Niney not having
a studio of his own at the time used most of Kingston's studios, again availability and money
providing. But most of these cuts selected for this release were cut at Channel 1 and a few
exceptions at Randy's Studio 17 and at Joe Gibbs studio at Burns Avenue.

Niney also worked closely with King Tubby on his dub plates, so tracks after the recording
sessions were taken to King Tubbys for reconstruction and sometimes re-voicing over an
existing rhythm.These were then used as version sides to the vocal cuts,but most importantly
used to nice up the dances, being played out on King Tubbys Home Town Hi - Fi Sound
System.We have pulled together a selection of such dub plate specials cut by the Soul
Syndicate band for this release. Dub sides that emphasise how well the band worked
together, and with Niney at the reigns and the added bonus of some Tubby magic sprinkled
on top. Please see our Niney the Observer at King Tubbys 1973 - 1975 [JRO11] for
further examples of this work.

We at Jamaican Recordings hope we are not alone in saluting the musicians, that played
such a big part in producing many of our favourite Reggae Sounds. Having released titles
by The Revolutionaries [JR003], The Aggrovators [JR005], Sly and Robbie [JR006], we are
now pleased to release a selection of rare Dub cuts by another one of Jamaica's finest, the
Soul Syndicate band to our catalogue...

Organize, share and promote your favorite music by creating  your own playlists, start right now 21912add this record's tracks to a playlist