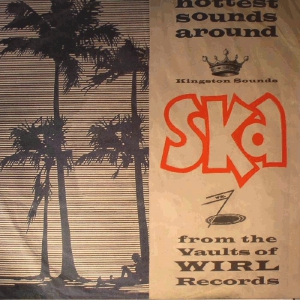 Ska was the name given to the music that came out of Jamaica between 1961 and '66, based on the American R&B and doo-wop records that the sound systems in Kingston used to play. But the American records' style started to mellow out while the Jamaicans preferred a more upbeat sound. So the sound system bosses became record producers to cater to this demand. Sir Coxsone Dodd and Duke Reid led the way, putting the top musicians on the island in the studio to make music, with the emphasis on the offbeat making the music unmistakably Jamaican. WIRL (West Indies Records Limited) was set up by the Jamaican politician Edward Seaga in the late 1950s. He had supervised the recording of an album of ethnic Jamaican music and needed an outlet for its eventual release. In 1962, the year of Jamaican independence, Seaga became a member of parliament, representing the Jamaica Labour Party, and decided to sell the label to Byron Lee, who changed the name from WIRL to Dynamic Sounds. Ska from the Vaults of WIRL Records features some of the best scorching ska sounds to come out of WIRL, and they still sound as fresh today as they did when they were recorded. Features tracks by The Skatalites, Johnny Moore, Roland Alphonso, and Don Drummond. CD edition features two bonus tracks by The Skatalites: "Lawless Street" and "Marcus Junior."

Organize, share and promote your favorite music by creating  your own playlists, start right now 22476add this record's tracks to a playlist